119: Which Wolf Will You Feed? with Amikaeyla Gaston 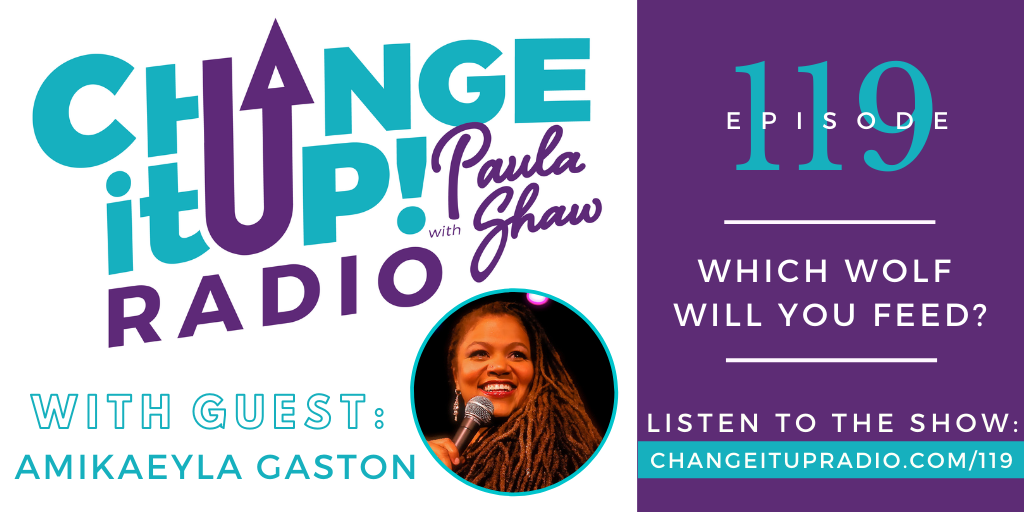 Life is unpredictable and uncertain…sometimes, harshly cruel and painful. We can’t control what happens in life…but we can control where we focus our thoughts, conversations, and behaviors in response to it.

In an old Cherokee parable, a grandfather tells his grandson that we all have two wolves living within us. The Light Wolf is kind, understanding, works for others, and does no harm. He lives in harmony with all around, he does not take offense or plot revenge.  His heart is open and available to the Great Spirit.

The Dark Wolf is vengeful, vicious, and full of anger. He has a terrible temper and fights with everyone for no reason. He kills without cause or remorse because his resentment, hatred, and anger are so great. His heart is closed to the Great Spirit.

After hearing this amazing information, the young boy asks his Grandfather, “Which Wolf wins?” Smiling, the wise old man says, “The one I feed.”

Amikaeyla Gaston had every reason to feed her Dark Wolf but instead, she feeds the Light Wolf every day. Her story will shock and amaze you. She has much to teach us all through her work and her example.

Join Paula as she talks with the incredible Amikaeyla Gaston. Proclaimed as one of the “purest contemporary voices” by National Public Radio (NPR), Amikaeyla is a force for change.

She unlocked her self-expression and healing ability in an intensive care burn unit after a near-fatal hate crime. Lying in excruciating pain and anguish after being told her legs would have to be amputated and she would never walk again, she discovered she could not only overcome fear, but also become fearless through the healing power of music.

Amikaeyla Gaston has been working in the Behavioral Health arena for over 25 years, bringing together artists and healers of all forms and from all specialties to promote healing and wellness through the arts & activism.

She is often called by the United Nations and embassies worldwide into difficult scenarios to offer inter-cultural literacy and deep restorative justice work in support of transformative and peaceful solutions.

Her Music As Medicine programming and work with at-risk children, youth and families, has been utilized and implemented by the Department of Health & Human Services, The American Psychological Association, and United Nations High Commission on Refugees.

Her extensive studies with traditional healers and cultural artists around the healing effects of music led to the commemorative Golden Buddha performance at the personal invitation of His Holiness the Dalai Lama, in India.

Amikaeyla appears regularly on television, radio, and film and has shared the stage with many accomplished speakers and musicians including Angela Davis and members of the Black Panther Party, Sweet Honey in the Rock, Pete Seeger, Baba Olatunji, Micky Hart, Amiri Baraka, Gil Scot Heron, Esperanza Spalding, and Sheila E.

She is the proud recipient of the United Nations Global Woman Award, the Voss Foundation Emerging Women Leaders Award, the Pioneer Award for Exemplary Leadership and Outstanding Service in Social Justice and Advocacy, and the International Hero for Peace and Forgiveness award.

Please listen to this show and share it with everyone you know.