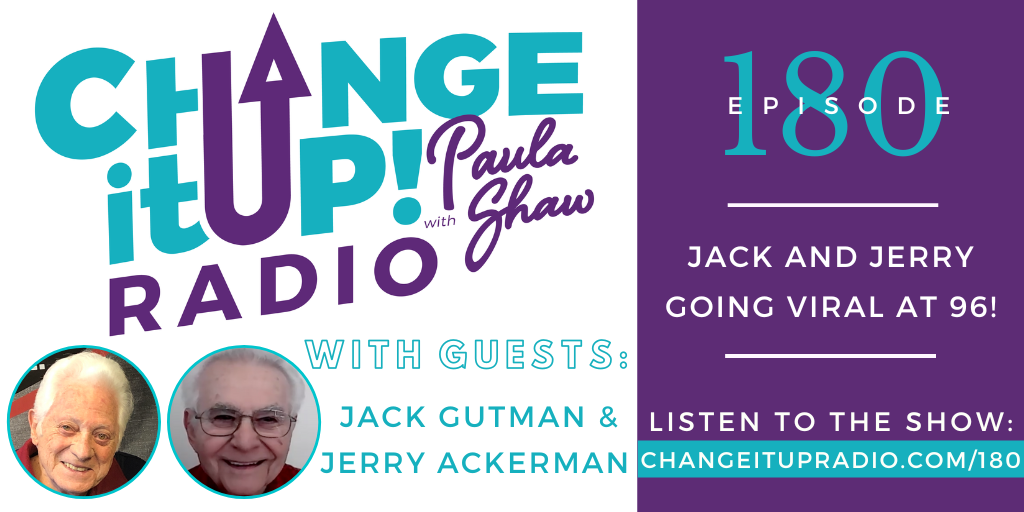 Today we’re talking about the reunion of two Veterans who were best friends in World War II but were separated for over 75 years, each not knowing if their beloved friend had survived. This touching story about love and friendship has since gone viral, now reaching over 2 million views!

My dad, Jack Gutman, and his best friend, Jerry Ackerman, met at Camp Pendleton in Oceanside, California, during World War II and were instant buddies who were both from New York and had many things in common. Unfortunately, they were separated when they were assigned different battleships that were en route to the invasion of Okinawa – one of the biggest naval battles of World War II that left thousands dead.

Fast forward to 2022, Jack and Jerry, who are now both 96 years old, have been reunited after a long 75 years of not even knowing if the other was still alive, all thanks to Jerry’s son, Peter, and some searching on Google! Many of you met both of these men when we shared their story on Memorial Day of this year. But, a lot has happened since then… a month after our last interview, Jack and Jerry finally got to see each other again in person!

In this episode, they reminisce about fond old memories and their fast-growing friendship during World War II and share their experience of being reunited for the first time in over 7 decades at Camp Pendleton, where it all began for them. This beautiful love story about two best friends reuniting after thinking that they’d never see each other again has since gone viral online, warming many people’s hearts, helping them during hard times, and reminding us all that nothing in this world is more important or more powerful than love.

Check out CBS8’s story of Jack and Jerry’s reunion here!

At 17 ½ years old, wanting so desperately to serve his country, Jack convinced his father to sign for him, and he enlisted in the Navy.

After training for months as a Medical Corpsman, his first active duty took him to England to prepare a hospital for the aftermath of the invasion of Europe. On D-Day, he landed between Utah and Omaha Beaches in the invasion of Normandy, having the difficult task of caring for those killed and wounded during the attack.

Today he is one of the last living World War ll Veterans who are healthy, lucid, and able to share with us the realities of D-Day,

Jack is also an active comedian, public speaker, and author who loves speaking to students and touching lives with his story. He wrote his book, One Veteran’s Journey to Heal the Wounds of War, to help people with Post-Traumatic Stress and other problems, such as sabotaging their lives by drinking to cope.

Jack was recently video interviewed by the Smithsonian World War ll Museum in New Orleans, and this interview is now part of the museum’s archives. He has appeared on Martha MacCallum’s Fox News show, The Story, on Ben Shapiro, in countless video interviews, and of course, on his daughter Paula’s radio show and podcast, Change It Up Radio.

Jerome “Jerry” Ackerman was born on March 16, 1926, and he is 96 years old. He was brought up in the Bronx, and his family consisting of his Mother, Father, Grandfather, and older brother, lived in a two-story walk-up in the East Bronx.

Jerry was a kid of the streets playing everything you could play with a ball – stickball, handball, punchball, stoopball, basketball, baseball, and football.

When he became 17 years old, World War 2 was raging. Jerry convinced his parents to allow him to join the navy. They consented, and off he went to boot camp. After boot camp at Sampson, New York, Jerry was transferred to St. Albans Naval Hospital on Long Island.

From there, he was transferred to Camp Pendleton in Oceanside, California, and that is where he met Jack Gutman. They became instant buddies as soon as they met, and he was the most jovial, fun-loving guy ever. Always smiling and always happy.

Jerry and Jack went on Liberty together and formed a club called “the 3 jays.” Joe Gagliardi became part of their group. They called themselves the 3 Jays because the first initial of their first names was a J.

Camp Pendleton was an underwater demolition team training base, the forerunners of the Navy seals. The three jays were kept busy tending to their medical needs. They were all eventually reassigned. Jack and Jerry were assigned to the USS Cullman, a troop transport. They don’t remember what happened to Joe.

Jerry was then assigned to the Cullman’s ships company. Jack was transferred to another ship, and that was the end of a beautiful friendship. Fast forward to the present, Jerry was having dinner with his son Peter at a local restaurant. Jerry doesn’t know where it came from, but he started singing an English tune that Jack had taught them.

Peter was curious and asked him where Jack lived. Believe it or not, he was able to get him on the telephone. Jack and Jerry talked for a long time and finished by promising to keep in touch.

“Just to walk over and put my arms around him, it was very emotional for me. Seeing my best buddy in the service after not seeing him for 75 years. What a great reunion and what a great couple of days we had together. The most important thing I have found is that we have each other.” – Jack Gutman